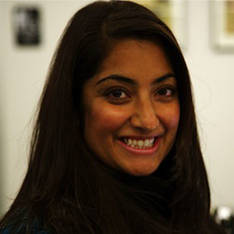 Director of Marketing and Media at Chicago Ideas

Sona Jones is the head of marketing and media at Chicago Ideas and leads overall communications and content strategy. Prior to joining Chicago Ideas, she worked in marketing across a number of entertainment and media entities. Most recently, she led brand marketing at BucketFeet, a Chicago-based footwear startup, focused on social responsibility through storytelling. Prior to that, Jones was Director of Consumer Activation at The Onion / A.V. Club where she oversaw marketing and sponsorships for the publication’s annual Music Festival, Comedy Festival, and SXSW events. At Rand McNally, she led the production of a Travel Channel TV-special based on a national digital platform called Best Of The Road. Jones began her career in consumer marketing at Sony Pictures working on films such as Spider-Man, and later, as the midwest regional manager for the studio’s in-theatre marketing team. Sona is a graduate of USC’s Annenberg School for Communication and Viterbi School of Engineering.