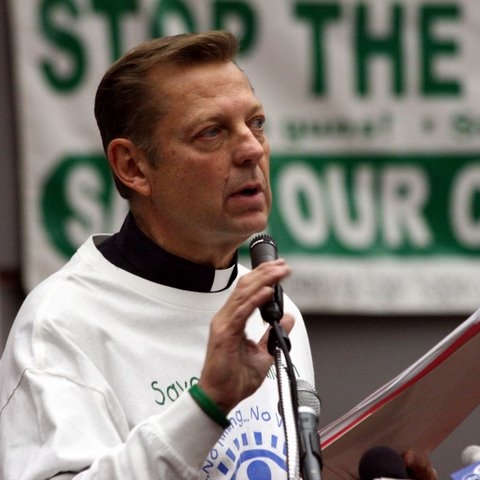 Reverend Michael L. Pfleger, “Father Pfleger,” has lived and ministered in the African American community on both the west and south sides of Chicago for nearly 40 years. He was ordained a priest of the Archdiocese of Chicago on May 14, 1975. In 1981, at the age of 31, he became the youngest full pastor in the diocese when he was appointed pastor of Saint Sabina Church. As a minister, Pfleger has sought to break down the walls of racism and denominationalism by building unity among all people founded on truth and based on Jesus’ command to love one another. This holy calling has led him to be parent, a preacher, a teacher, a lecturer and an activist. In the course of his extensive and active ministry, Pfleger has been recognized for his commitment to equality and passionate stance against injustice and for his fight against alcohol and tobacco billboards, drugs and racism in numerous papers, and journals, including People, Time, Ebony, Newsweek, The New York Times, the Los Angeles Times, The Washington Post, U.S.A. Today, The Chicago Tribune, and television programs, such as 60 Minutes, the Larry King Show, and Nightline. Pfleger received his B.A. in Theology from Loyola University, his Master of Divinity from the University of St. Mary of the Lake and an honorary Doctor of Divinity from North Park Theological Seminary. He has also completed post-graduate studies at Mundelein College and the Catholic Theological Union.