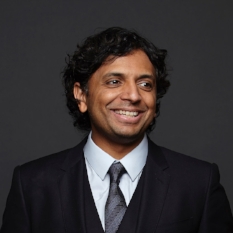 Screenwriter, director, and producer M. Night Shyamalan has captured the attention of audiences around the world for almost two decades, creating films that have amassed more than $2 billion worldwide. His films include The Sixth Sense, Unbreakable, Signs, The Visit, and most recently, Split. In 2001, Shyamalan cofounded the M. Night Shyamalan Foundation with his wife, Dr. Bhavna Shyamalan. It is dedicated to supporting remarkable leaders and their grassroots efforts to remove the barriers created by poverty and inequality in their communities. In 2013, Shyamalan wrote I Got Schooled, a nonfiction book that dissects the ongoing debate about how to improve the U.S. education system and provides a roadmap for change. Shyamalan resides in Pennsylvania with his family.